As Antoine-Laurent de Lavoisier summarized in the 1700s, “Nothing is created, nothing is destroyed, everything is transformed”. Fortunately, there are those who still today base their business on the concept of circular economy, transforming waste into a resource. 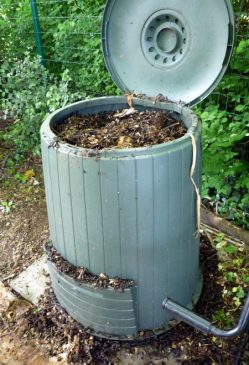 Why not use earthworms to decompose our organic waste and produce a valuable fertilizer, reducing their disposal costs, as well as the resulting environmental damage?

Worm composting is the biological process of valorization of organic matter that makes use of the work of earthworms, in addition to that of microorganisms present in nature. It can be considered a type of waste recycling that occurs naturally and faster with the help of earthworms. The result is humus or worm cast, which is a nutrient-rich fertilizer that is optimal for every kind of plant.

Today we often talk about sustainability and the volume of waste that we generate in our homes with our lifestyle. Despite waste sorting that helps recycle metals, plastic and paper, we continue to produce a lot of organic waste. Much of this type of waste is made up of food scraps that could end up in a compost bin instead. It is not necessary to have a garden or a piece of land. It’s possible to find a small space even in your own apartment to start doing some worm composting.

WHY WE SHOULD COMPOST?

Earthworms fragment organic matter, making it easier for microorganisms to work. With this technique, worm compost is created, known as worm humus and black gold. This product is an excellent organic fertilizer very rich in essential elements for plant growth.

We can contribute in decreasing the quantity of organic waste discharged into landfills, reducing the consequent emissions of methane gas into the atmosphere. Home composting is a simple, practical and sustainable way to recycle our food waste directly at the source.

The compost bin can be placed in a corner of your garden, rather than integrated into a vertical vegetable garden system as we show in the article “DIY vertical garden worm composting planter“. 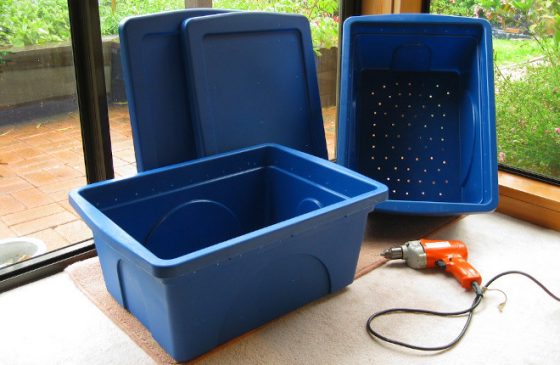 Even with little space available, it’s still possible to make home composting directly in our apartments simply by using a domestic compost bin created from a couple of plastic containers. The system  consist of two or more stackable plastic boxes, where the container at the base collects the organic slurry produced.

The upper containers serve as canteen for our earthworms. In the first container at the top we will insert our waste, this container needs a lid and holes in the bottom.

Before starting to introduce our waste we will have to provide each upper container with a base commonly called a bed, composed of a substrate where the worms can feel comfortable. The bed can be created by adding soil, ready-made humus, bits of cardboard, sawdust and moistened straw. Then it will be time to introduce earthworms and the shredded organic waste.

The importance of earthworms for fertilization and soil recovery is known since ancient times. The species used in the production of worm casting are those that limit their activities to the first 15 cm of the soil. They are the “tiger worm” (Eisenia fetida) and the “red worm” or “Californian worm” (Eisenia andrei). 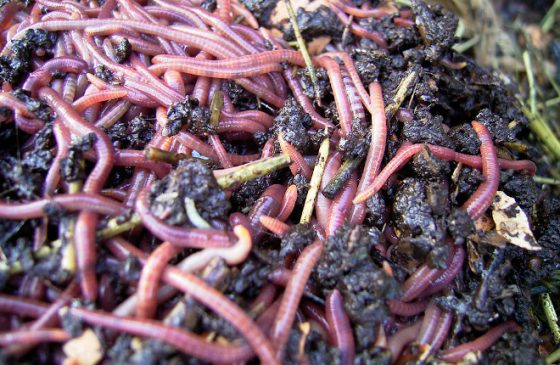 Both species favor temperatures between 58 and 68 °F outside. They can bear more extreme temperatures however, between 39 and 90°F.

These worms have the power to ingest soil and organic matter equal to their weight, managing to digest and excrete over 60% of it in the form of precious humus.

Furthermore, they are able to process a wide variety of materials in less time, have a high conversion rate of compost to humus and a high reproduction rate.

WHAT CAN MAKE WORMS ESCAPE

When the environment inside the compost becomes unfavorable for these little animals, they will try to escape. For this reason is necessary that the containers are always closed tightly. In most cases, poor conditions lead to the loss of reproductive activity or the death of the worms. In order for this not to happen, we should pay attention to some factors.

Humidity: Low humidity reduces the action of microorganisms and earthworms themselves can die from dehydration. Otherwise, an environment that is too saturated with water can lead to the death of earthworms, limiting air circulation. We deepen the topic in the article “The importance of moisture levels in the compost bin”

Temperature: the metabolism of earthworms slows down at temperatures below 58ºF, while they could die in freezing temperatures or above 70ºF.

pH: earthworms need an environment with a pH between 4 and 8, outside this range there may be a decrease in their activity

Waste nature: some types of waste we could introduce can raise the temperature and acidity levels, negatively impacting the process. In this regard, you may be interested in the specific article on “How to introduce food waste in the compost bin“. Gardeners can conveniently test their moisture, and pH levels with the handy ActiveAir 2-Way Meter. Moisture readings register on a scale of 0 (dry) to 10 (moist), and pH readings between pH 0 (acidic) and pH 10 (basic) are represented. The durable, easy-to-read tester is suitable for indoors or out and needs no batteries to operate

The concentration of worms in the upper layers means that the underside is too humid. This problem can be solved by adding more sawdust or absorbent material, as well as avoiding adding additional liquid-rich waste.

If the opposite occurs, then the worms concentrate on the bottom of the bin, it could mean that the substrate is too dry. The substrate, if squeezed in the hand, must be moist but not drip. On the contrary, just spray some water to increase the humidity there.

When the compost smells unpleasant, we have probably put in too much litter rather than too much large litter. If the waste takes too long to be processed can attract insects and give off bad smells. At this point we have to stop introducing further waste until the situation is under control again, mixing the substrate to allow better oxygenation.