Once the light regime suitable for the flowering of the marijuana plants is changed to a cycle of 12 hours of light and 12 of dark, plants undergo a change in the internal chemistry that causes another type of growth, the formation of flowers.

It is important that the regime is severe. A longer daytime period would cause a delay or non-flowering. A shorter light cycle, on the other hand, would lead to lower production. The plants will begin flower formation ideally within a couple of weeks. During these first two weeks the vegetative growth of the large leaves stopped. Once the sex is determined, we will separate the males of the system which will allow the remaining females to have more space. Males can be used to make pollen with which to obtain new seeds. Females will instead develop our beloved flowers.

You may be interested in the article: “How to determine the sex in cannabis plants”

THE FLOWERING OF CANNABIS PLANTS

Since the needs of the plant have changed respect to the vegetative cycle where the plants have a high percentage of nitrogen, also the fertilization must change and be reduced. If the flowers do not appear within the first two weeks, the cause is too much light during the “night” cycle, rather than excess nitrogen or lack of phosphorus.

Once the females begin to bloom, they will begin producing flowers that group in clusters. Buds are made up of flowers and tender shoots that will soon be covered with tiny caps. The tiny drops that shine through the light contain nothing but precious resin. Buds reach their definitive size after 30 days from the appearance of the first flowers.

They will then begin to mature for another two weeks. The flowering process lasts between 45 and 60 days in total depending on the species and the conditions created. They have flowers formed by a calyx from which a pistil comes out formed by two white hairs in the shape of a “v” designed to capture the pollen that is deposited in the chalice where ideally the seed will form. When the plant is fully pollinated, the energy of the plant is used exclusively for the production of seeds by stopping the production of THC. 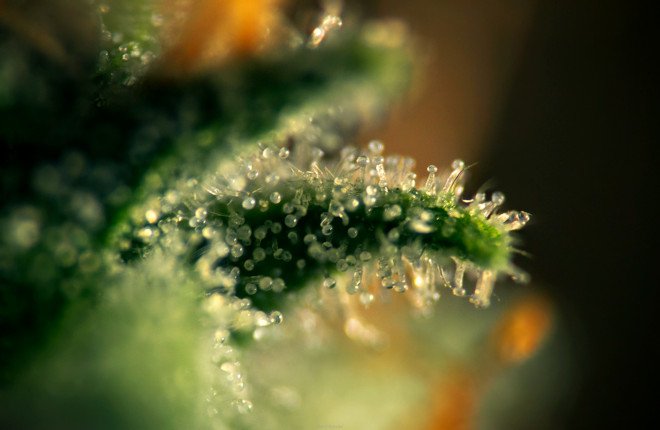 At the time of ripening, the pistils begin to dry out, darkening and turning brown. In turn, the resin swells and the plant becomes covered with resin. The resins have different aromas depending on the species. As the flowering progresses, the large leaves turn yellow until they fall off.

This is part of the normal flowering process of plants and we won’t have to worry as long as the buds and young shoots remain vigorous and green. The leaves should never be plucked but dropped or removed by pushing them down only when they come off easily. When a flower ripens without being pollinated, the pistils dry out. When most of these darken, the plant is ripe and ready to harvest. If the maturation has been exceeded, the THC content could be degraded, on the contrary a slightly earlier harvest would favor the presence of THC at the expense of that of CBD.

The exact point of remains subjective. Quality seeds specify the characteristics and peculiarities of each plant, including the duration of the ideal reference flowering period. The more premature species finish the process in about six weeks. Indica strains generally flower faster than Sativas and are more generous in terms of yield in relation to their height.