HOW TO DETERMINE CANNABIS PLANTS SEX

There is no way to determine the sex of cannabis plant until they begin flowering. Even using feminized seeds that give us the highest chance to know their sex in advance, there can always be a 1% chance that a male plant come out from a feminized seed. Male plants are the “nightmare” of any grower that grows cannabis for its bud as there always will be a chance to waste time and space growing plants that won’t produce any. Normally male hemp plants start flowering slightly before their respective females so that is easy to recognize them and take the correct precaution in advance to avoid unwanted pollination. It’s possible to force a single stem into flowering simply by obscuring it to trig its bloom, otherwise knowing the basic difference between a male cannabis plant and female, together with some patience will do.

Cannabis plants give birth to small flowers attached to the main stem in the internodes, right next to where the new branches sprout.

The first flowers appear around the eighth or ninth node from the base, when the plant has already formed twelve or more nodes. This may vary slightly depending on the species.

The female plants form a flower formed by a green cup (calyx) from which a white filament is born that opens into two pistils that form a “v” facing upwards. Each cup is covered with resin glands, like small buds. The flowers grow so close to each other that they form buds covered with white hairs (pistils).

The tip of the plant gives rise to the top, which is the set of buds that grow so close together that they form a very large and elongated top (the largest and highest quality bud). The tips of the main branches also form smaller buds. Females plants overall tend to be shorter and more branched.
Sometimes they have a bulge at the base of the branches, where they adhere to the main stem, before presenting the flowers. However, only the appearance of these buds will confirm the sex of the cannabis plant. When the buds have formed, it’s time to pollinate some of them to get seeds. In order to achieved this is enough that little pollen taken from a male plant  comes into contact with the pistil of the female one. 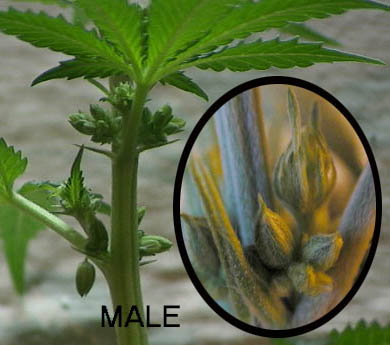 Males have flowers that prematurely look like two green balls attached to the knot. Once formed, they end up hanging from a small stem and acquire a yellowish tone with streaks similar to small melons. These spheres open into four sepals from which hang four yellow stamens laden with pollen. Pollen won’t last long once the flower has opened.

Males form clusters of balls that dangle. Pollen is a very fine whitish powder that can be carried by the wind for hundreds of meters, facilitating its diffusion. Males should be kept away from females as soon as the flowers are identified and before they open and release their pollen. A few flowers can pollinate an entire system.

Males are usually eliminated to avoid this. If we wanted to, it would be enough to keep them away from our system if by chance we intend to collect pollen if we intend to pollinate ourselves some female plant in a more controlled way.

The safest way to collect pollen is to insert the top of the male chosen as “stallion”, in a white or transparent paper bag. We can seal the envelope at the stem with duct tape and cut the tips of the growth of the branches, leaving the large leaves to keep it alive and removing any flowers that grow out of the envelope. When the flowers open and the pollen will be visible. The male is cut at the base and kept for a few days to release all pollen. To pollinate, we will deposit some pollen in a cellophane bag where we will introduce the top of the female chosen to be pollinated, taking care not to damage it.
We seal the envelope with tape and then remove the envelope containing the pollen the following day. So we will just have to wait for the formation of the seeds and their ripening.

Pollination of one or more buds of the female plant does not affect the quality of the rest of the buds and the plant. There are many reason someone would wish to pollinate its female plant, perhaps a grower wish to keep the genetic and does plant to take a break from growing.