The purpose of the “spawn” is to increase the fungal biomass, previously present as a small mass of cells in a Petri dish or liquid culture, and to expand this mass to possibly several kilos of mushrooms.
The seed is generally made up of cereal grains such as barley, wheat, rye, oats, rice, etc., already colonized from the fungus. Each colonized grain, mixed in the final substrate, becomes a point where the fungus will develop,  colonizing completely the bag or jar containing the substrate in just few days.

To sterilize a gram of cereal, whatever it is, we need to eliminate a large number of possible contamination. Immediately after the hydration of the grains, these microorganisms begin to proliferate very quickly. Of all these microorganisms present in the beans, bacteria are the fastest. Bacteria can multiply every 20 minutes on average at room temperature. At such a rate, a single bacterium can multiply into more than a million cells in a matter of hours.

If only a small part of these contaminating microorganisms survive the sterilization process, the result can be devastating, making the “spawn” not usable and a vector of contamination for the other batches present.

Once sterilized, it is assumed that the grain of the cereal used is completely free of microorganisms. Even the air is full of suspended microorganisms and spores, using HEPA filters (and for some extend a glove box) allows to drastically reduce their presence in the work environment.
Therefore, after sterilization, the containers or bags containing the final substrate must be moved to a clean place or must remain in the pressure cooker or autoclave until one is ready to use them.

The amount of water added to the beans is another important factor. An excess of water promotes the growth of bacteria, as well as slowing the growth rate of the fungus mycelium. When the hydration of the grains exceeds the necessary, they usually burst, exposing the kernel of the grain. This also promotes the development of bacteria. 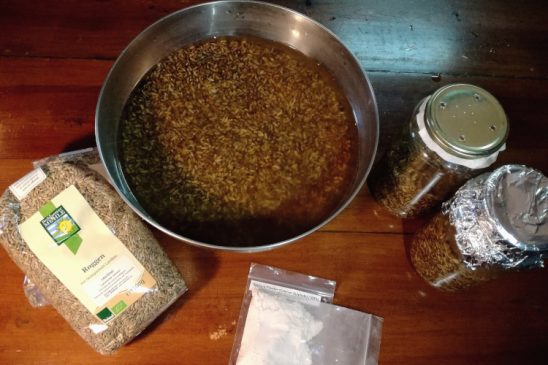 Determining the correct hydration point of the cereals we use is not a difficult task, depending on the cereal used there are guidelines that can be followed, with a minimum of experience you can easily get there. The beans are immersed in boiling or warm water in a pot for a certain amount of time until they reach the right hydration level, then drained. After cooling and drying outside, the beans are placed in glass jars, containers or polypropylene bags, usually with acrylic or cotton filters.

Growers should adjust the moisture content and sterilization time based on tests and observations. A very important factor when creating your own “spawn” is the container air filter. During the colonization of the grains the mycelium needs to breathe, for this it is necessary to have an air filter that prevents the entry of contaminants, but at the same time releases the carbon dioxide produced by the mycelium.

Some growers use a double layer of micro porous tape as a filter, rather than cotton wool or coffee filter portions. You can also find heat-resistant plastic bags made specifically for growing mushrooms with a filter built into the plastic; this always to allow an adequate exchange of air during the development of the mycelium. 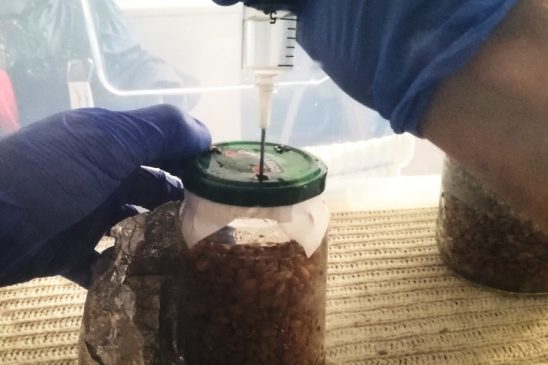 A simple method to make a container suitable for growing the “spawn” is to use glass jars (such as those of jams so to speak). The lid is pierced and the filter affixed under the cap. There is also the possibility of making an entrance where the needle will inject the liquid culture, in order to minimize the possibility of contamination. Just drill a hole with a nail in the lid of the jar and apply a drop of thermal silicone that resists high temperatures during sterilization. This silicone needle entry port closes automatically immediately upon removal of the needle, reducing the possibility of contamination to a minimum.

There are many ways to make containers suitable for the producing the”spawn”, as are the suppliers of specific containers available on the market. The important thing is that the chosen container can be sealed, withstands high temperatures and has a filter that allows CO2 to escape without allowing contaminants to enter.

After preparing the substrate and the containers, we can fill the jars. Always in case we used jars rather than bags, we must cover the lid with a double piece of aluminum foil so that the water that condenses inside the pressure cooker where we sterilize them, does not enter the jars through the holes in the air filter.

The next step is sterilization. Up to this point the material used did not require any kind of cleaning or treatment. We just prepared the jars, put in a filter, hydrated the cereal grains and filled the same containers. 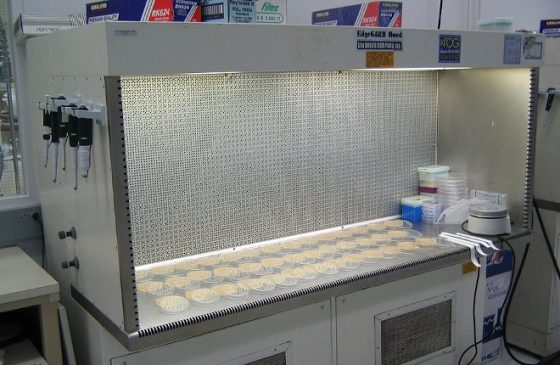 After sterilization and cooling we can introduce the mycelium by adding pieces of already colonized soil or through a liquid culture. To inoculate the vessels with the liquid culture it is necessary that the inoculation takes place in a place free of contamination.

Usually in a laboratory, this procedure is performed in a laminar flow hood, where the air pass though HEPA filters, or inside a glove box. The “glovebox” consists of a transparent plastic container with 2 holes through which to put the hands in the gloves to handle the sterile objects.

There are several ways and ways to build a “glove box”, with a simple search on your search engine you will be able to understand which model is best suited to your needs. 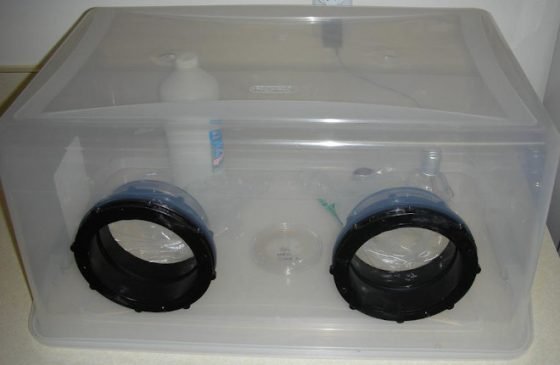 Whenever the “glove box” is used,  it’s still essential to sterilize with alcohol or an ammonia solution. Any procedure can be performed in the glove box, from cloning, inoculating “spawn”, inoculating substrates, handling culture media, Petri dishes and much more.

All materials and surfaces must be as clean as possible, but what really makes the difference are the air currents, therefore the technique. Although you sterilize your glove box thoroughly, there must be no drafts carrying microorganisms to remain so. So after having moved and cleaned it, it is always better to wait at least 30 minutes so that any particles left inside it are deposited, before starting the operations.

The advice is to use a sort of raised grid where to keep all the objects, keeping them suspended from the bottom of your “glove box” and therefore away from the spores that can be deposited by gravity. By following these tips and moving quickly with precision, you will be able to use the “glove box” avoiding contamination or reducing it to an acceptable percentage.

Once you already have a jar of 100% colonized substrate, you can use it to inoculate other jars with the freshly sterilized cereal. This technique is called “grain to grain” and is a great way for rapidly multiplying the amount of “spawn” exponentially.

The initial colony that has been inoculated directly with a liquid culture or a piece of colonized culture medium is called the primary matrix. The primary matrix contained in a jar can therefore be sorted and used to colonize another 10 cans. These 10 jars can be used to colonize another 100 and the process can go on indefinitely, contamination permitting.

After inoculation, the spawn must be incubated. Incubation is a very important process in mushroom cultivation and essentially consists of providing the ideal conditions for the mycelium to colonize the substrate in which it is found. Incubation is the next step after inoculation. Light and humidity are not that important at this stage, as the containers are sealed and keep the moisture inside them. Instead, the temperature must remain constant between values ​​between 20 and 25 °C (68-77°F).

During the incubation is recommended to check the jars regularly, and avoid shaking them in order not to break the hyphae that are growing. This daily check allows you to monitor the development of the mycelium and the possible appearance of contamination. At the slightest sign of contamination, you will need to discard and dispose of the contents away from the workplace.

Some molds and bacteria can be harmful to our health as well as for the mycelium, so be careful if you need to handle and eliminate them. The most common contamination at this stage are caused by Penicillium and Aspergillus mold, and bacteria that make the grain rotten and slimy. Any material that smells rancid should be discarded. Usually in case of contamination the smell is pungent and will leave no doubt.

The mycelium has a whitish color, any other color (green, blue, orange and black spots) is indicative of contamination and must sound like an alarm bell. 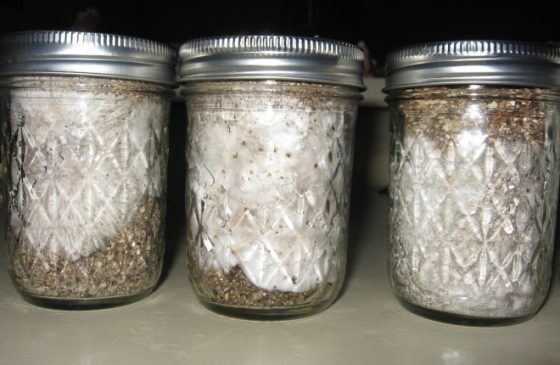 The incubator can be made in different ways, in cardboard boxes, polystyrene, switched off refrigerators or entire rooms. The temperature inside the incubator must be kept constant; Incandescent lamps, aquarium heaters (for small incubators) and room heaters (in case the room is larger) can be used.

Know that incubators made with closed containers must be opened daily to renew the air. The jars have filters so that the excess CO2 produced by the mushroom escapes. If the CO2 escaping from the cans is concentrated inside the incubator, there will be no air exchange.

Once colonized, the “spawn” can be stored for a short period of time before a decline in vitality occurs. As the spawn ages, the nutrients contained in the grains run out slowing the growth rate of the fungus. Therefore losing vitality, the mycelium also gradually loses its ability to defend itself from any contamination.

The spawn keep his optimal conditions for 30 days, after which it will rapidly begin to lose its vitality. However, if you don’t intend to use it soon, you can keep it in the refrigerator. The “spawn” can be refrigerated for  few months at a temperature never lower than 39°F (this also depends specifically on the species we cultivate). This step will slow down its metabolism and growth, extending its conservation.