Mushroom cultivation success used to be an activity that very much depended on climatic conditions. The substrate was prepared and sown taking into account the season when the temperature and humidity conditions were favorable. This still happens today for small producers of Shiitake and some species of Pleurotus.

For example, French growers of the genus Agaricus, better known as champignon, has found in the eighteenth century the ideal environment for cultivation,  the right temperature and humidity, in the French caves. Growers can adapt different places  for mushroom cultivation, such as basements, garages, silos, rooms, containers, caves, etc.

In general, structures designed and planned for mushroom cultivation have several advantages over structures adapted for cultivation. For amateur growers who intend to produce for their own consumption, even a plastic box can act as a fruiting chamber, making it possible to grow different types of edible and medicinal mushrooms. Obviously the scale of the fruiting chamber must be made according to the needs of the producer. These can therefore range from a 40 liter plastic box to a greenhouse of several square meters and more.

The fruiting chambers aim to maintain the correct cultivation parameters, such as humidity, temperature and air exchange. Each mushroom species has its own ideal parameters, so the grower must be careful when designing the structure that will receive the colonized substrate.

The following guide will serve as an informative basis for the design and proper planning of a room, greenhouse or fruiting room. 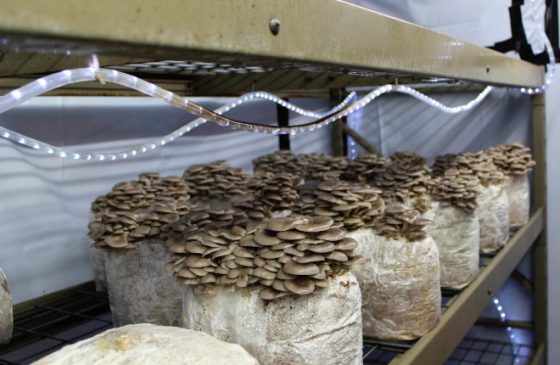 Starting from the micro producer, the one who wants to produce mushrooms for his own consumption, or for those who approach cultivation for the first time without large investments.The smallest type of fruiting chamber is known as the Monotub.

The monotub basically consists of a transparent organizer box or buckets with holes on the sides. The box acts as a greenhouse, keeping the optimal humidity, while its holes allow for air exchange.
As we saw in the article “Introduction to mushroom cultivation“, the mycelium of mushrooms produces a lot of CO2 through its metabolic processes. This CO2 must escape from the fruiting chamber in favor of fresh air that enters through the holes. In a chamber like the Monotub, these air changes occur passively.

The mycelium produces heat, heating the air above the block. When the air that is heated, it becomes less dense than cold air and rises. As a result, the cold air descends and this movement causes the internal air to mix with the external air as it passes near the holes drilled on the Monotub. Also, small air currents that exist in the place where this box is stored helps.

Consequently, the CO2 rates within the Monotub are within the ideal range for growing the mushroom. To obtain a correct balance it’s necessary to make small adjustments such as size and quantity of holes. These adjustments should be made according to the grower’s observation in consideration of the results of the previous crop. Small adjustments must be made to each production batch to maximize results.

Monotub holes can be covered with porous materials that allow air flow, such as cotton and many similar other materials. This prevents insects and mites to enter and carry different contamination. Grower shouldn’t plug these holes to prevent proper airflow, for fear of air contamination such as fungal and bacterial spores. Spores of fungi and bacteria will already be on the block, in the air and in the box, even cleaning as much as possible.

There is no need to be afraid of these spores, the only concern is the correct maintenance of the cultivation parameters of the desired species. If the colonized block of the mushroom species you want to grow is placed in a Monotub with the correct  humidity and air exchange parameters, it will develop perfectly.

If the colonized block is placed in a Monotub lack of oxygen, the mycelium will die or weaken. The fight against contamination, in this phase of cultivation, takes place through the maintenance of the correct cultivation parameters, much more than trying to protect the mycelium from the entry of contaminants.

The humidity of the box is another factor to consider depending on the technique you will use in Monotub.
Mushrooms are 90% water and the environment in which they grow must be fairly humid. There is a technique that also uses a Monotub style box called PF Tek, where the substrate blocks are colonized inside glass jars or plastic containers, and only after being colonized are they distributed inside the box. Using this technique, mycelium cakes are unable to provide sufficient moisture for the system.

The PF Tek technique is easier due to the lower risk of contamination, as the colonization of the substrate occurs entirely within a previously closed can or container. There are several equally effective methods to correct humidity with this type of technique.

Some growers fill the monotub with a finger of water and place the containers containing the mycelium on saucers or anything that allows them to be kept high above the water level. Others form a carpet of perlite previously dipped in water rather than add a finger of water time to time. In both cases the water evaporating will keep the humidity inside the monotub at high and optimal values.

After assembling the Monotub box and colonizing the substrate, just place it in a bright place at the right temperature for the development of the desired species of mushrooms. If these containers are done correctly, they work autonomously without the need for any kind of intervention.