WHAT ARE MUSHROOMS SPORES?

We know that re the spores that allow mushrooms propagation. They separate from the fungi and travel long distances thanks to the air currents until they fall on a suitable substrate, giving birth to another colony of mushrooms.

When we collect these spores, we can place them in a container containing substrate, and start cultivation. Growers do not normally use spores to grow mushrooms due to the high genetic variability. Each pair of spores will generate a different individual. This means that hundreds of genetically distinct strains exist within the same block colonized by the spores of a given fungus. Some of them will produce mushrooms sooner, others later, some will have different color shades and sizes. 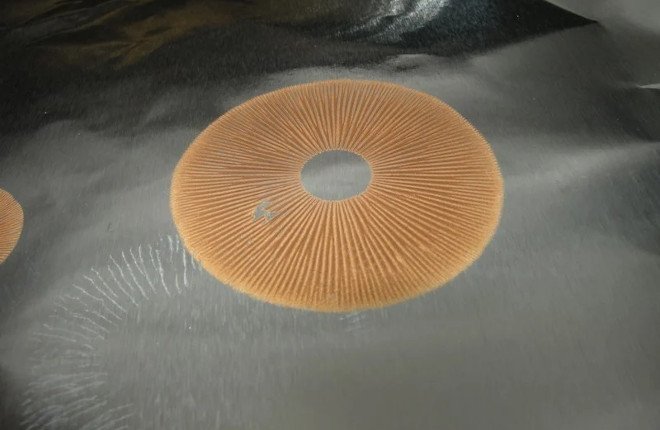 This variability is not a problem for those who grow mushrooms amateur, but definitely not the best for commercial purposes productions. Usually, laboratories that produce the spawn choose to use genetic clones of individuals with the desired characteristics.

To collect spores from a mushroom, simply separate the cap from the stem and place it on a surface thoroughly cleaned with alcohol, such as a piece of aluminum foil or a sterile Petri dish.

To avoid drafts, which carry the spores of other microorganisms including molds and yeasts, a cup is placed over the cap to protect. After a few hours there will be a deposit of spores on the surface of the aluminum foil, which follows the radial symmetry of the lamellae. This deposition of spores on a surface is called a spore print.

The spore harvesting process must be done carefully as any unsterilized object that touches the spore deposition site could cause future contamination. Best to use latex gloves and clean tweezers to avoid possible contamination when handling the hat. Afterwards, the aluminum foil containing the spore stamp is folded and placed in an airtight container where the spores will also keep for a couple of years.

Many mushrooms have a structure called a veil, which consists of a thin film that runs from the stem of the mushroom to the edges of the cap, protecting the gills. The veil seals the lamellae so that the internal part remains protected from external contamination until it opens, which occurs in the maturation of the fungus as it grows.

In this case, by choosing a healthy and young mushroom with the veil still intact, removing it from the place where it grows and placing it in a clean place, it’s possible to obtain spores free from contamination.

HOW TO MAKE A SPORE SYRINGE 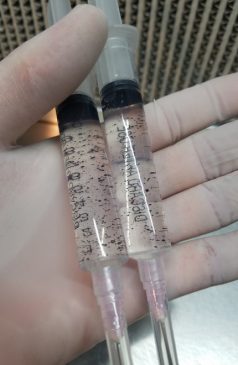 Once the spore print is obtained, it’s possible to start a mushroom culture. Originally, the spores are moist and have a high germination rate. Over time they dehydrate, making them less effective. One way to facilitate the germination of spores is to soak them in sterile water so that they can absorb moisture. After a few hours they will be ready for use. One way to do this is to make a spore syringe.

The spore syringe is a syringe containing sterile water and the spores of the desired fungus. To make a spore syringe, simply scrape a spore stamp, using a previously sterilized scalpel with a flame from an alcohol lamp.

Spores should be deposited in a sterile jar or cup, such as a collection vessel for examinations of those commonly sold in pharmacies. The water used must also be sterile, it can be purchased or sterilized in a pressure cooker or autoclave.

If we don’t intend to use them immediately, spore syringes can be stored in the refrigerator; possibly in an airtight bag with zip closure at a temperature between 2 and 6 °C (35-43°F) for an indicative duration of 6-12 months. The spores are surprisingly resilient when stored in the correct conditions, clearly their viability tends to fade over time. 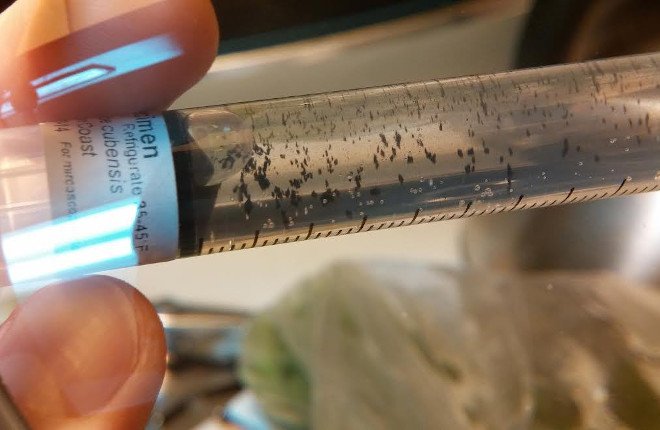 With the mushroom spore syringe prepared this way, you will only need 3ml of spore solution to colonize 1 liter of substrate. If you don’t use it all, you can put it back in the fridge again and use it in the future.

After few days from inoculation, white spots will begin to grow where the spore were injected. It may take weeks for the entire substrate to be fully colonized. Wait until the entire substrate is colonized by the mycelium of the fungus before beginning the fruiting process. When the mushrooms begin to grow and mature, they can be harvested and their spores can used to prepare more syringes and restart the process again and again.