Home » Hemp » HOW TO CLONE, PRUNE AND MAKE CANNABIS CUTTINGS

Cuttings are the basis of large indoor crops. Cannabis reproduces in two ways: sexually and asexually. Sexual reproduction occurs when the male fertilizes the female’s flowers with his pollen, which then produces seeds.

Asexual reproduction occurs when a part of the plant emits roots and becomes an independent individual, precisely through the cuttings.

Asexual reproduction is well known in other plant varieties such as geraniums for example and all succulents. The interesting thing about this technique is that the cuttings are genetically the same as the mother plant, we can consider them its clones. Growing cannabis from cuttings has numerous advantages. All cuttings of a plant will have the same sex as the mother. So by taking cuttings from female plants we will be sure to get as many female plants.

Starting from non-feminized seeds, on the other hand, there will always be the unknown for months and we should plant and grow twice as many plants to get the number of female plants we want.

Another compelling reason for making cuttings is that it allows us to keep the genetics of the plant we want alive indefinitely.

If we plant ten seeds of a variety, not all plants will be equally vigorous, some will produce a more potent resin and larger buds. So we can choose to keep the “best” plant for its genetic qualities by cloning it and replicating it so that the next harvest has characteristics of the same type.

All cuttings of a plant are identical in their growth patterns, flowering time, need for fertilizers, etc. By always working with the same plants it becomes much easier to plan the harvest.

Another advantage that derives from this trecnica is in the reduction of the times. In fact, normally a cannabis plant grown from seed will not be ready to flower until 6 weeks or more after sowing.

Cuttings, on the other hand, can be induced to flower at any time and with any size given that their genetic age is the same as the mother plant. Cuttings are small portions of adult and mature plants. Indoor growers almost always work with cuttings and push them to flower as soon as they reach 30-40cm in height.

MANY SMALL PLANTS CAN PRODUCE MORE THAN FEW LARGE PLANTS

When we cut a cutting and put it to root, it suffers a great trauma. The stem that took care of sprouting new branches and leaves, will now have to start putting on new roots.

The role of the grower is to ensure that this change occurs in the least traumatic way possible for the plant, so that it resumes its growth as soon as possible.

The main risk for cuttings in the first few days is dehydration. Having no roots so they cannot absorb water or nutrients. To prevent them from dehydrating and dying, the cuttings should be placed in a place with high humidity (more than 90%). On the market there are specific trays for rooting with a transparent lid. During the first few days the germinator will remain totally closed and the humidity must be kept constantly high by spraying the lid of the tray. Subsequently it is possible to open small air intakes from the lid to allow greater aeration and a gradual adaptation to the usual conditions once the roots have started to develop.

During the rooting process, the cuttings do not need a lot of light. The temperature, on the other hand, is another determining variable in the survival rates of the cuttings, and should remain as stable and constant as possible in values ​​between 24-30ºC. For this reason many growers use a heating mat to be placed under the tray.

The composition of the soil mixture in which we root the cuttings must be such as to keep it moist between one watering and the other and allow good oxygenation to the new roots. You can mix perlite and vermiculite in equal parts, others add soil and earthworm humus. Even rock wool cubes or possibly ordinary soil can serve the purpose.

A very important help during cutting is given by rooting hormones. These come in powder, liquid or gel form and stimulate root production. The tips of the plants or the lower branches can be used as cuttings. Generally a branch is chosen and the tip is cut (10-30 cm.). The cut is made halfway between two knots always at a 45 ° angle. Immediately after cutting the clone, you have to put it in a glass with water. The leaves of one or two nodes of the cutting are cleaned as they will be underground and the new roots will emerge from these. For a cutting to take root, at least one node must be buried underground.

Makes a hole with a pencil into the substrate cubes you previously prepared and hydrated. The diameter of the hole must be a little larger than the cuttings. The clone is removed from the water and introduced into the rooting hormones. It is therefore planted very carefully. It is important to press the substrate around the cutting so that it is firmly in contact with the stem.

Then the cuttings are introduced into the tray where they will root and can be sprayed with distilled water or not like the walls of the tray.

It’s important to spray the cuttings from time to time so that they do not dry out. As long as they have no roots they will be able to absorb some water only through the leaves. The first 4-5 days are the most delicate for the life of our cuttings.

Cuttings can take a week or more to take root depending on the conditions we create for them. When the first roots sprout through the walls of the rooting cubes, it’s time to transplant them into larger containers. HOW TO PRUNE CANNABIS PLANTS AND WHY

Pruning involves cutting off shoots, leaves or branches from a plant. Depending on the pruned parts we will have different results.

By pruning the shoots of the plant we can increase the branching while keeping the plant small and compact. Low undeveloped branches are removed so that the plant focuses all its energy on the main buds. The leaves, on the other hand, must not be pruned because this creates unnecessary trauma to the plant. 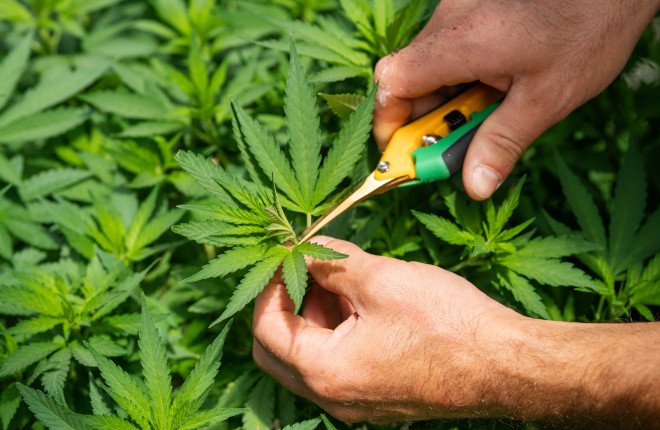 If you look at the last leaves that come out on top of each branch, you will notice a new shoot in the center. By cutting this shoot, the plant will branch two branches at the first node below the cut. The nodes are where the branches and leaves meet the stem. If you later cut the shoots from the branches, they will branch again and instead of 2 main branches, you will get 4.

These operations can be done since the plant will have 3 or 4 sets of leaves and should never be done nearing and during the flowering period.

Small branches that do not develop are pruned so that the plant concentrates its energy on the larger ones. It is also recommended to eliminate the branches where the light does not reach well also to allow greater oxygenation.

There are growers who simply let the plant develop the central bud without branches for space reasons. In fact, these plants are taller and narrower.