Home » Compost » HUMUS: What is it, How to Make it

Humus is nothing more than soil particularly rich in nutrients that are easily assimilated by the plant immediately. It is a true concentrate of elements such as carbon, nitrogen, iron, phosphorus, calcium and manganese, which are essential for the thriving and healthy growth of vegetation. Furthermore, by increasing the water retention capacity of the soil, humus makes it even more fertile. 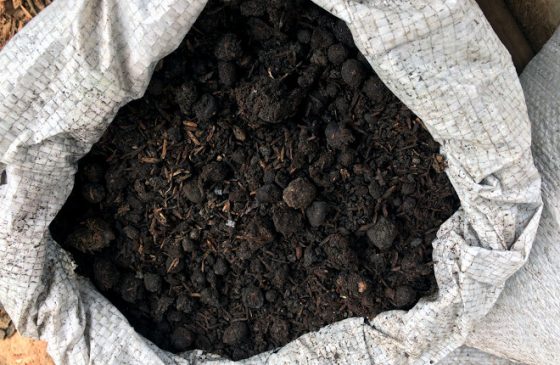 Biologically, humus acts as a source of energy for the development of microorganisms; without microorganisms humus would not exist, and finally without humus, life on our planet as we know would not be possible. Microorganisms are mainly responsible for the formation of humus from plant waste, producing it continuously through the decomposition and transformation of organic matter into minerals.

The role of microorganisms in the cycle of organic matter in the soil, as well as in nature, is simply indispensable. Without the transformation of animal and plant remains into humus, all the essential elements would remain trapped in these “dead” organisms, without being able to go back to being reused.

It’s a fact that the use of industrial fertilizers, in addition to being polluting and expensive, has further negative aspects. High quantities can damage and burn the roots of plants, and even leading to their death. In the opposite case where the quantities used are scarce, the ecological damage remains, without a real benefit for the development of plants.

As for the use of humus, however, there are no real negative consequences of any kind. Being an element naturally present in nature, there cannot be a problem of dosage, the plants will always and only absorb the elements they need.

There are different types of humus in nature, but in this article we will focus on earthworm humus, or humus that derives from organic matter decomposed through the digestive process of worms.

These animals, digging tunnels in the ground, plow it naturally, while ingesting the organic residues present, they  decompose and transform it into compounds that are easier to assimilate. Earthworms produce a by-product which is further broken down by various microorganisms present in the soil, becoming humus. They simply facilitate the work of microorganisms by breaking down organic matter into smaller pieces.

Find out more on this topic in the article: “Basic guide to worm composting“.

Through composting it’s possible to transform most domestic organic waste into a very rich humus. The advantage of this practice is the reduction of the amount of waste produced destined for landfill, actively contributing to reducing the consequent emission of greenhouse gases into the atmosphere. The first real advantage is for the environment to which we belong, the second is to obtain an ecological, effective and economical fertilizer for our garden and for our beloved plants.

Soil contamination by heavy metals is a major concern for human health that is being talked about more and more. Increasing amounts of chromium, arsenic, mercury, cadmium and lead are detected in the soil, inevitably contaminating the aquifers.

The intensive use of pesticides and industrial fertilizers are one of the causes of the increase in the presence of these metals harmful to life on our planet. The process that occurs during the production of earthworm humus is currently considered the most effective feasible method to reduce soil contamination, according to scholars and researchers.