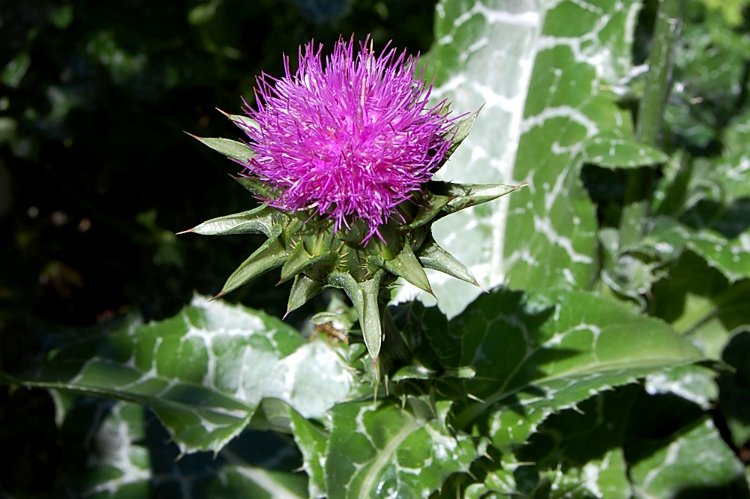 Milk thistle is an annual/biennial plant that grows in dry, rocky soil throughout southern and Western Europe, and in some parts of the United States.

The stem grows tall and bears spiny leaves, which are dark green in color and streaked with white along the veins. Milk thistle flowers from June to August, bearing a single spiny, reddish-purple blossom. The fruit of the plant (commonly misidentified as the seed) is used for health purposes.

Milk Thistles can grow from 30 to 200 cm  tall, and have an overall conical shape. The stem is grooved and more or less cottony.  Leaves are oblong to lanceolate with spiny edges. They are hairless and shiny green, with milk-white veins.

Milk Thistle roots are eaten raw or boiled, buttered or par-boiled and roasted. The young shoots in spring are particularly nutritious, microgreens can be grown with success given the quantity of seeds that each plant provides, along with the ease of collecting them.

Also the stems (after peeling) can be soaked overnight to remove bitterness and then stewed. Leaves are trimmed of prickles, and boiled as a spinach substitute, rather then added raw to salads. Just about all parts of this plant are edible and nutritious, with no reports of toxicity. Although it can be used as food, milk thistle is better known as having medicinal benefits. It is a great tonic, increases appetite and aids in digestion. It is used by many people, including those who were addicted to alcohol to cleanse the liver. Milk Thistle is used internally in the treatment of liver and gall bladder diseases, cirrhosis, hepatitis and poisoning.

Once Milk Thistle reaches maturity, it develops seed clusters which are scattered by the wind. Seeds are harvested once ripe, and then grounded to make a beneficial tea. This plant is considered hepatic, galactogogue and demulcent.  Its use promotes healthy digestive function, increasing bile production, decreasing inflammation and soothing the mucous membranes throughout the body. 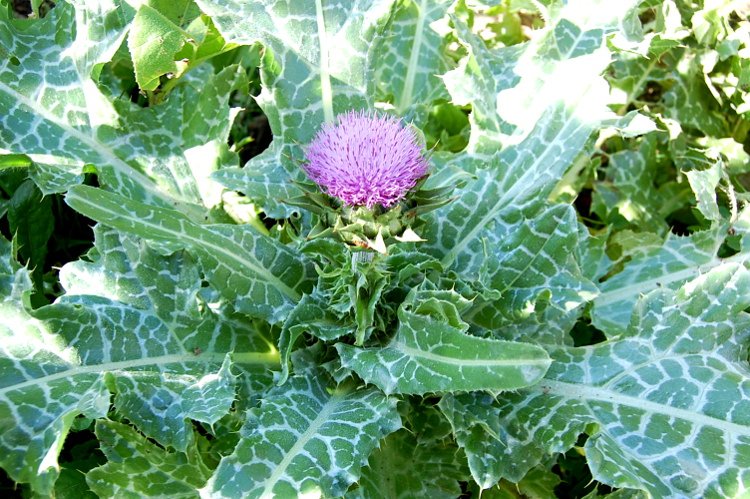 Milk Thistle benefits work by drawing toxins out of the body that can cause a range of symptoms and diseases including cancer development, high cholesterol, diabetes, kidney stones, gall bladder disorders, negative effects of chemotherapy, alcohol use, skin damage and more.

As an antioxidant, it is equally powerful to other important nutrients like vitamin E or vitamin C, which help fight free radical damage and slow the aging process that can lead to disease development. It specifically contains high levels of lipophilic extracts from the seeds of the plant.

While it has many different benefits, milk thistle is most well-known for being a natural liver supporter and detoxifier. You can then crush the seeds and seep them along with the leaves to make tea, eat them raw or dry then into powder form. If you purchase or grow a milk thistle plant, cut off the entire head and hang the plant upside down for about one week to draw out the seeds.